When purchasing transformer winding raw materials, you will likely come across a large selection of aluminum strips and copper strips.

These are two of the most popular choice of winding material for low voltage dry-type transformers. Transformer aluminum strip and copper strip are similar in appearance. But what’s the difference?

Below, we breakdown the history, grade, product type and application of these two very different materials so you can determine which is the best winding strip for your transformer project.

The history of transformer aluminum strips dates back to the early 1900s. This is when electricity was first used to power appliances in homes and businesses, and transformers were used to change electrical voltages.

Aluminum was chosen for its light weight, resistance to corrosion and because it has a high conductivity (the ability to transmit electric current).

The first transformer aluminum strip was made by an American engineer named Charles Proteus Steinmetz (1865-1923). Steinmetz designed his first transformer in 1896 while working for General Electric Company in Schenectady, New York. He invented a way of making aluminum wire that could be wound into coils or flat strips which could then be used as part of an electrical circuit.

Today’s transformers are still made using this same basic principle but they have been refined over time so they can carry more power with less weight and cost to produce. The most common types of transformers are three-phase units that provide alternating current (AC) at various voltage levels depending on the type needed and where it will be used in the electrical system. These include household outlets, industrial facilities and even entire communities like cities or towns.

Aluminum strip is a very useful and versatile material for transformers and other electrical equipment. It has many advantages, such as low weight, high strength, excellent conductivity and corrosion resistance.

The alloys used in the manufacture of aluminum strips are specifically designed for use in transformers.

The grade of an aluminum strip is determined by its chemical composition, mechanical properties and quality control requirements. There are three main grades of aluminum: 1050, 1060, 1070 and 1350.

Transformer copper strips are made from pure copper and are used in transformers. The material is very strong and flexible, making it ideal for use in electrical equipment. It is also easy to shape, solder and weld.

Although pure copper can be used to make transformer copper strips, this metal is rarely used due to its high cost. Instead, a mixture of copper and other metals is often used. This allows the manufacture of a cheaper product that still has the same properties as pure copper.

The first use of transformer copper strips was in 1820 when they were used in the production of telegraphs. These devices had been invented by Samuel Morse and were used to transmit messages over long distances by means of electrical signals sent through wires laid on poles along railway lines or installed underground in cities such as New York City and London, England.

Transformer copper strips have been used in many different types of electrical equipment since then including household appliances such as refrigerators and washing machines as well as industrial machines like electric motors and generators that produce power for factories, offices and homes all over the world.

Copper foil is one of the main materials for producing transformers. As an important electronic device, the transformer will convert one voltage to another voltage. The two coils are called primary coil and secondary coil.

It is mainly used to connect with the transformer core and output terminals.

The foil strip made of high-quality oxygen-free copper, which has good conductivity, has small contact resistance and low temperature rise, and can effectively reduce power loss and ensure long-term stable operation of the transformer.

Copper strips for transformers winding grades are as follows:

What are the Differences Between Transformer Aluminum Strips and Copper Strips?

As you can see from their grades and standards,aluminum strip and copper strip is very different. Depending on what you are looking for in your transformer projects, they each have benefits and drawbacks. For a side by side comparison, you breakdown the differences even further.

Aluminum strip has several advantages over copper strip. It is more resistant to corrosion and heat, which makes it suitable for outdoor use.

The conductivity of aluminum is lower than that of copper at room temperature but increases as the temperature rises. This means that aluminum is more efficient at transferring heat than copper, making it ideal for electric heating elements and radiators.

Aluminum strips are relatively cheaper than copper strips. However, many China suppliers are offering a range of transformer winding materials at competitive prices.

The density of a material is the ratio of its mass to its volume. Density is used as a measure of how compact or voluminous a substance is.

The density difference between aluminum and copper can be used to determine how much more material is required for an application using aluminum rather than copper. For example, if you need 100 pounds per square foot (psf) of insulation on your transformer core, then you would need approximately 133 psf if it were made with aluminum instead of copper because 2.3 times more material would be required by the transformer manufacturer in order to achieve the same amount of insulation when comparing their densities together.

The resistivity of a material is the measure of its resistance to electric current. This property is important for transformers because it determines how much heat the material can withstand before melting or burning. The higher the resistivity, the more heat that can be dissipated without reaching unsafe temperatures.

1.What Are Aluminium Strips and Copper Strips For Transformers Winding Edges Options?

Many products managers and engineers have the trouble of transformer aluminum strips and copper strips edges.

In the actual operation process, due to the influence of steel strip hardness and unloading speed, it is difficult to effectively control the edge of the transformer winding strip.

However, after our technical personnel have studied for a long time, we have found a solution to this problem. The edge finishing of our aluminium foils strips shall meet the requirements of the below figures show.

2.How Aluminum Strips For Transformers Winding Are Made?

The aluminum strip for transformer winding is made of high-quality aluminum material, which has the characteristics of high conductivity, soft texture, smooth surface, no burrs and no waves. The fineness of aluminum foil can be controlled at 0.2 mm or less, and the alloy composition and temper can be adjusted according to customer requirements. The thickness tolerance is ±0.007 mm, the width tolerance is ±1mm, the diagonal difference is ≤1mm and the surface quality is good.

3.How Copper Strips For Transformers Winding Are Made?

Copper foils strips for transformers winding production process is to use the continuous casting and rolling method to produce long copper strips with a thickness of 0.2mm-1.2mm.

The general production process of copper foil strips is:

3.The finished product is annealed, and then annealed, bundled according to specifications, and aged;

4.Use appropriate packaging for storage or transportation.

4.What is The Packaging Standard of Copper Strips and Aluminum Strips? 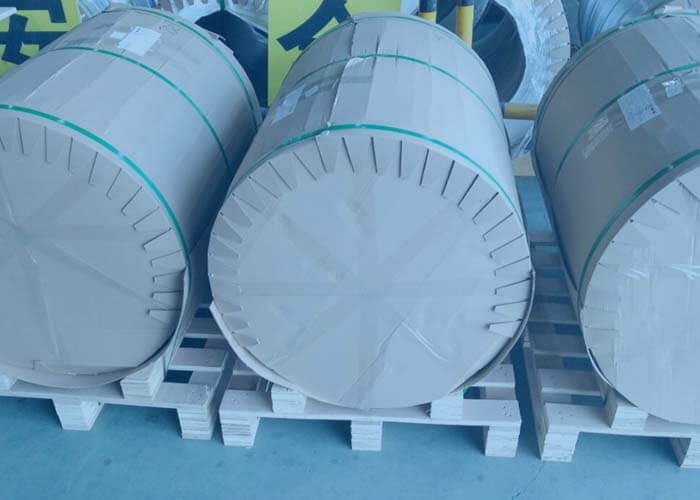 The packing for aluminum and copper strips for transformers is mainly about wooden pallet and wooden box.

The strip length of each roll should be same, packaging mark should have clear and complete information.

Whatever size at whatever tight tolerance of transformer winding strips you demand, HZW here is sure to have it!

Masters in precision stainless steel strips and metal strips manufacturing with 17+ years of experience and services for 560+ happy clients!